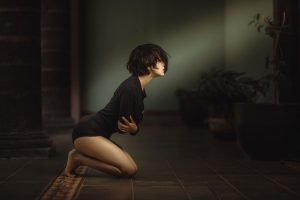 Susan contacted me on 9th  December 2019.  Her 16 year old daughter, Chloe, had been diagnosed with gastroparesis(delayed gastric emptying) earlier that year.  Now, she could barely eat more than a mouthful. She had been suffering from digestive problems that started with chronic diarrhoea back in September 2018.  She was under the care of

a consultant at hospital and had missed months of school.  The diarrhoea stopped but she was left with almost constant pain and bloating and found it difficult to digest most things and was living on a very bland repetitive diet. In April 2019, she was diagnosed with gastroparesis. She could only eat very small amounts of food at a time before feeling nauseous and bloated.  The consultant put her on new very strong medication.  It helped a bit, but over time the medication ceased to work and by December 2019  she could barely even eat or drink a few mouthfuls and was in almost constant pain. The consultant wanted to prescribe some even stronger medication, saying that if it didn’t work she would have to be hospitalised and tube fed. He said that there was no cure for gastroparesis and that she might never be able to eat solid foods again.

It was at this point Susan contacted me. She was terrified about her daughter’s future and wanted to try another way.  I only had a few days to make a difference as Chloe was eating and drinking so little.  If there was no change soon then she would be hospitalised. I was only able to take a short case at the beginning over the telephone.

Chloe was suffering from a great deal of abdominal pain that extended down to her legs. She felt very nauseous most of the time and this became much worse if she ate anything. The pain was changeable in nature and moved around.  She was unable to attend school.  She was burping frequently and had lots of bloating. Her energy was very low and she just wanted to lie down.  She didn’t like a hot room and wanted to have her window open.  Chloe felt very low and wanted cuddles.

To start with I prescribed Pulsatilla 1m and Nux-v 30c given at different times.

The next day the nausea was a bit better after eating and the pain was slightly less.

A week later her pain levels had lessened and her nausea had improved.  Each day had been different with some good days and some bad days, but there had been some improvement.  She had been able to eat more, mostly soft foods, which gave her mother the confidence to continue. She was taking Pulsatilla 1M and Nux-v 30c quite frequently and the effects didn’t last very long. At this point I took her full case. The following is a short summary in addition to the earlier symptoms:

She felt full only after eating a few mouthfuls and had lots of burping, breaking wind and bloating. Her abdomen was distended and sometimes hard. She felt a bit better after burping.  Chloe was still nauseous after eating meals and the Nux-v helped with this. Her stools contained undigested food.  Her nausea and wind was often worse late in the evening. Her digestion was very slow and she felt it sat in her stomach for a long time. She had been taking charcoal tablets regularly for the past few months on a friend’s advice.  I asked her to stop taking these. She had a history of being aggravated after eating pork and red meat. She was very anxious about the future and her health and had often suffered from anxiety.

I decided to give her Lyc 30c and Carb-v 30c daily at different times as a liquid dose. She could also take Nux-v 30c after meals if her nausea was bad.

A week later she was eating more and  able to drink a daily food replacement shake  plus  yoghurts and some solids. Her energy and mood had improved and she no longer had any pain, which was amazing as she had been suffering with pain for nearly a year. Her stools were  better formed  with less undigested food.

January 2020.
After the xmas holidays, Chloe managed to go back to school taking a range of different foods with her. She was able to have chunky soups, bread and fruit without pain and only occasional nausea on top of a daily food replacement shake and her appetite was increasing. This was less than a month after starting homeopathic treatment.

February 2020
Appetite increased. Energy very good and mood also very happy. Very little nausea occasionally. No bloating and burping except when very tired late in the evening. Eating more solids and has even been able to eat half a chicken sandwich at one sitting. Digestion is working well. No undigested food in stools. She has stopped having her meal replacement shakes as she can now eat enough normal food and has three meals a day.   She developed a headache which lasted a few days. I moved her up to Carb-v 200c and the headache disappeared the same day.

April 2020
Remember the consultant said she may never be able to eat solid food again!  This case demonstrates the power of homeopathy.  Within a few months of homeopathic treatment she  returned to almost normal eating.  Prior to this she had been under the care of a consultant at the hospital for over a year and her condition and her ability to eat had declined dramatically, in a life-changing way, during that time..  See updates from Susan below: 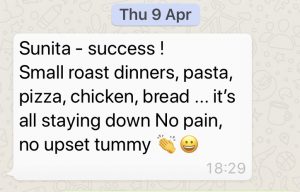 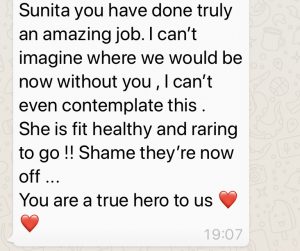 “Couldn’t Put It Down! Loved this book! So exciting from start to finish!”

“Awesome. It is well written and has a good story behind it. I could not put it down”

“Great fiction that actually sneaks in many homeopathic principals”

“Thrilling adventure and great characters – a surprise around every corner”

“Insightful, Clever, Lots of Fun, and a Great Intro to Homeopathy”

Revive is a  fantasy action/adventure novel where the characters are based on homeopathic remedies. No prior knowledge of homeopathy is needed.  Homeopaths and non-homeopaths alike, can read it.  It is available on Amazon and has many 5 star reviews.
I wrote Revive as a fun and immersive way to experience homeopathic remedies and kingdoms. I have tried to stay as true to materia medica and used specific rubrics, gestures and words to bring the remedies and kingdoms to life. If you would like to know more about how I wrote Revive, click here

For other countries search in Amazon for your country.

Case of anxiety during lockdown relieved with homeopathy 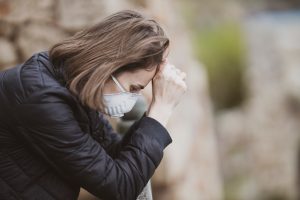 Joyce, a lady in her late 60’s, contacted me for severe anxiety during lockdown.  She was extremely fearful for her daughter, who is immuno-compromised, and regularly had negative thoughts flashing through

her mind.  She had also started to worry about her own mortality, and whether she would survive. Her mind was crowded with anxious thoughts such as the fact that she hadn’t done a will.  This was very unusual for her as she was normally very positive. Joyce was usually a very active lady who was always out and about, so lockdown had affected her greatly.  With the anxiety she had started having hot flushes that started in her chest and moved upward over her head. These were worse after anxious thoughts.  In addition to the anxiety, she had started having palpitations and was conscious of her heart racing. At night she was very aware of her heart racing when she was trying to go to sleep.  She would eventually fall sleep, only to wake up a couple of hours later around midnight to  2am. Her mind would then go into overdrive and she would be restless for the rest of  the night, barely sleeping.  This had been going on for a few weeks and was really taking a toll on her physical, emotional and mental wellbeing.

I prescribed the homeopathic remedies Aconite 200c and Arsenicum 200c.

Update next day:  Thank you Sunita for the instant relief from my anxiety. The homeopathy has really helped.  I had a better night sleep. I even coped better emotionally, as last night my husband wasn’t feeling well and that would definitely have set off my anxiety, but I was able to cope and even slept well after.

Update two days later:  Slept well for second night, even after getting up to go to the toilet, I was able to get back to sleep.  I’ve only noticed my heart racing once since starting the remedies. Thank you.

Read some useful tips on anxiety and homeopathic remedies that can help here.

Case of young boy with flu and cough resolved with homeopathy 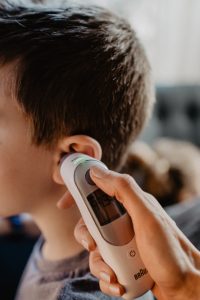 This case has been reproduced here with the  kind permission of my client Kirsty.
Kirsty rang me to say that her little boy, who is immuncompromised, was suffering from the worst flu he had ever had. He had been declining for a few days and the anti-biotics prescribed by the doctor weren’t working . She

had been advised that if he didn’t get better overnight that she should take him to A&E.
He was feverish with a temperature of around 38.3 but this fluctuated. He didn’t want to eat anything and  was throwing up fluids soon after drinking them. His eyes were red and he was very sleepy all the time and had no energy.  The sound of his breathing was very rattly and you could see his chest going up and down very quickly and his chest area was sucked in when he was breathing.
Every time he coughed he would get really hot and would keep retching, He had smelly wind after coughing sometimes. At night he was waking up frequently.  His eyelids were very heavy and he had also been pulling at his ears.
Kirsty had tried a few remedies, but so far they hadn’t helped.
She had a homeopathic kit at home.  I asked her to give Ant-t 30c but she didn’t have that, so the next closest remedy I asked her to give was Ipec 30c which she had.
The next morning his cough was better and not so deep.  The rattling was less and his breathing was not so fast.  Kirsty said that his breathing rate had reduced from 32 to 25 breaths per minute within an hour after taking the remedy. He had a better night sleeping and didn’t wake as frequently. Kirsty said he looked better. He was sitting up more and not as sleepy.  No more vomiting and a normal temperature. This was the first improvement in days. By lunchtime he had more energy and asked to eat something. She was able to get the other remedy Ant-t that day and started giving that to him the same evening.
The next morning when we spoke, he had had a really good night.  Kirsty said he was quite snotty, but said that his cough sounded like it was on its way out. He was smiling and had more energy.
The following day  Kirsty said, ” he is running around now.  He has only coughed a handful of times, and his nose has dried up.”  He was now only taking the Ant-t twice a day.  A couple of days later I got a text from Kirsty saying that her son was doing ‘fab’ and eating loads.
This case demonstrates how quickly and well homeopathy can work even when symptoms are very debilitating.  It can be difficult sometimes to choose the best remedy yourself and this is where contacting a homeopath can help.
Read more about homeopathy for flu and coughs here